Thank you so much for all your love and support over these last months. It has been wonderful to have a month based here in the UK after a busy month of travel in the USA in March. Once again my bed and my home feel familiar to me and what a bonus it is to be in Oxford during spring. The cherry trees are in full bloom and the purple and yellow tulips in my garden have been gorgeous. I am blessed!

Although we have been at home more life has not been boring! We have travelled throughout the UK preaching, praying and connecting! In fact we have visited Wales, Scotland and England this month and on the first weekend of May we will be in Ireland. So we have touched all 4 nations of the United Kingdom in 5 weeks! Helen has even been to Egypt too…We have had time in the Brecons in Wales, Oxford, Rochdale, London, Peterborough, Hexham, Motherwell in Scotland, Lincoln, Bath, Nottingham and Scarborough. We have covered some miles, felt tired at times, but been blessed by the hunger we find in each place. Every venue and each meeting has a story to tell and the people we are privileged to meet are so amazing.

This year, during our Easter celebrations, I was impacted once again by the power of the sacrificial life of Jesus. What incredible love and trust Jesus demonstrated for His Father as He lay down His life for us. This year Easter represented to me an intense story of the mutual love between a Father and son as I reflected on this story. How deeply Jesus wanted to satisfy His Father’s desire to save a world of broken people.  How willingly He gave His life. WOW what a gift of life!

Many who celebrated Easter this year, did so in situations of great personal and national turmoil, not least the Coptic Christians in Egypt who, on Palm Sunday, were attacked by extremists in two churches resulting in the loss of over 40 lives. Amazingly, many refused to be intimidated or stay at home and the churches were full of worshippers over the Easter weekend even though every street in which there was a church was cordoned off by the police and airport style security was set up at each church entrance across the nation. Please pray for the Christian community in the Middle East and for their Muslim neighbours.

As we have been busy, Gordon continues to work and build bridges of love and hope into the Muslim communities here in the UK and across Europe. As many of you know, Gordon has been birthing a movement called Mahabba, which means “Love” in Arabic.  (www.mahabbanetwork.com).This is essentially a prayer and equipping movement which has been mobilizing ordinary Christians to reach out to Muslims. It has grown rapidly and there are now 45 cities in the UK with Mahabba groups.  The Mahabba network has also spread into France, Belgium, Norway and Austria…and Korea! Recently Mahabba was recommended for its work by the very influential Lausanne Global Analysis https://www.lausanne.org/content/lga/2017-01/ordinary-christians-can-reach-muslims-better-than-specialists, and the General Secretary of the European Evangelical Alliance has asked us if we could set up a Mahabba Prayer Network across the whole of Europe to mobilize churches to reach the millions of migrants and Muslim people in Europe. So Gordon is busy strategizing. Mahabba is partnering with 24/7 Prayer as the main prayer vehicle to help facilitate this network across Europe. God seems to be up to something! However with all this rapid growth life has also been challenging and the finances for this work have become stretched. Now the time has come to raise financial support for each worker pioneering in this amazing mission of Mahabba. If you would be interested in supporting Gordon and his work in Mahabba please contact us at the Heartcry office (office@heartcry.co.uk) as we would love to partner with them financially during this season of rapid growth. 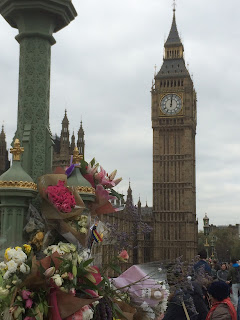 During April we have also had the privilege to have prayer days for our nation. One of the most moving days was in London on the 12th April. We took time to walk Westminster Bridge where the recent terrorist attack claimed 4 lives. The flowers and cards of condolence were still tied to the railings and there was a hush of respect and sadness around the area. As we prayed for peace and cleansing of this land, suddenly Big Ben struck midday! Although totally unplanned, here we were on the bridge praying for London and the UK and the clock struck 12 o’clock.  I felt God speak to me in that moment and say “Do not fear. I hold the times and seasons for this nation – I will bring my government and peace to this land.” (the number 12 represents God’s government and order throughout the Bible). We stood and prayed for parliament and for right Godly order and there on the 12th day at the twelfth hour we cried to God for His government. Within one week suddenly we have a General Election announced! So let us pray for His government for this time to be in place! In fact when the General Election was announced we were standing on the England/Scotland border outside Hexham praying for the establishment of God’s Kingdom in the United Kingdom! So, I believe this is an exciting time for God’s Kingdom in the UK!

In May we will again mainly be in the UK apart from a weekend visit to Ireland at the beginning of the month. We are grateful for those of you who continue to partner with us in prayer – thank you!

Thank you for your partnership, friendship and prayer support!